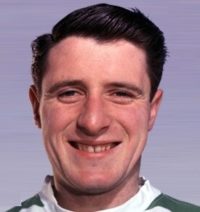 Ray Houghton, Tommy Coyne, Aidan McGeady and James McCarthy. What do they all have in common?

They are all Scottish born footballers who have opted to represent the Republic of Ireland at international level during their careers. The first man to do this was non other than Charlie Gallagher. Born in the Gorbals, 1940, Charlie’s parents were originally from Donegal and they, like so many, had emigrated to Glasgow. Therefore Charlie was legally permitted to represent the country of his parents if he so desired. It meant a great deal to Charlie. Ireland was dear to him. Every summer he’d return to Gweedore in Co. Donegal to visit even after he got married so getting caps for Ireland was a proud milestone for him.

Gallagher was signed by Celtic in 1959 at just 18 years of age from Yoker Athletic. He was the first of the ‘Kelly Kids’ – a group of promising youngsters been pioneered and reared to catapult Celtic back on top of the Scottish game. Quite frankly, it was an underwhelming period for the Green + White half of Glasgow around the time of Gallagher’s arrival. From the years 1938 to 1966, Celtic won just a single Scottish League title in that time. Subsequently that sole triumph being a League + Cup Double in 1954 but that stat just puts into context how far off the pace Celtic were, on the periphery of success. Faith was put into the hands of these kids such as Charlie Gallagher, Joe Logan, Billy McNeill, to name a few, were chosen to help change Celtics’ fortunes for the better.

Since Gallagher found it difficult to nail down a place in McGrory’s side, he was deployed in different positions generally across the midfield. The number of Kelly kids were increasing in the squad. A lot of new, fresh faces at training so places were up for grabs right across the board and there was a lot of serious talent coming through. Bertie Auld, Billy McNeill who was already mentioned, Paddy Crerand, Bobby Murdoch, Jinky Johnstone. These lads were the crème de la crème. It would always be difficult to get a game competing for places with players of such high calibre and you wouldn’t be selected if you weren’t some bit decent. There was something changing in the air at Parkhead. 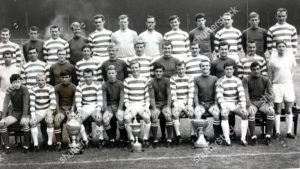 Gallagher would never of been associated with showboating, trickery, rabonas, allthat kind of stuff. He was most fondly remembered for his cool, calm and collective presence on the ball. A very relaxed and level-headed kind of guy. He wouldn’t be considered as your typical midfield general that we’re familiar with, no Charlie Gallagher wasn’t the most physical player. Instead, he was, the architect. The man that settled everything down, he just got on with it. No drama, no fuss. He was renowned for having a rocket of a shot and a superb delivery off each foot, a rare skill funny enough. Overall a very shrewd operator.

Jock Stein’s instalment as manager in 1965 really brought out the best in Gallagher. Initially he once again struggled to break into the side until Big Jock oversaw Charlie excel in the centre of a modern day two man midfield. This led to Charlie playing a significant role in delivering success that had eluded Celtic for so long. Gallagher took the corner that Billy McNeill scored from in the 1965 Scottish Cup Final victory over Dunfermline. This would be Celtics’ first domestic honor in 7 years. It proved to be the catalyst as Celtic would go on to win the League the following year, thereby qualifying for the European Cup.

It was moments of magic from Gallagher that were crucial to the European Cup success although not playing in the Final in Lisbon. It would yet again be the Gallagher – McNeill axis, a perfectly executed corner  landing on Cesar’s head which resulted in the ball bulging in the onion bag. The goal being a 90th minute winner in the Quarter Final win over Vojvodina of Serbia(formerly Yugoslavia), a game in which Celtic truly struggled in. If it wasn’t for that corner, Lisbon could well of never materialised.

A very famous quote from Gallagher: ‘For years it galled me that the only thing people remembered me for was two corner kicks.’

To which his wife replied: ‘Your name is in history for that.’

He undoubtedly played his part in Celtic’s greatest achievement to date, a story Charlie himself, humbly refers to when he was a special guest at our Passage West branch of Cork No. 1 CSC 10 year anniversary dinner in 2006. Gallagher’s final game for Celtic was in 1970 and later worked as a scout for the club. He racked up a tally of 32 goals in 171 appearances. May he Rest In Peace.